These albums are in stock now and available for purchase online 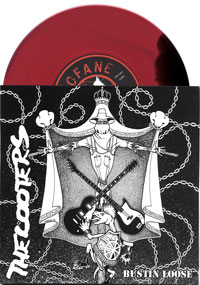 This killer 7″ features The Cooters rockin’ anthem “Bustin’ Loose” back to back the pissed off thrasher “The Gooch.” This vinyl EP is a perfect blend punk rock, stoner metal, and pissed of satirically written political lyrics. The cover features custom cover artwork by Dutch artist Marald van Haasteren, comes on black vinyl with a red sunburst swirl, is hand numbered, and was released for their ’05-’06 mini tour with Swedish band Imperial Leather. Each vinyl record swirl is totally different from the others, there are only 300 pressed, and this is surely The Cooters most awesome record to date!

Released in 2005 by Profane Existence Records
Catalog Number: EXIST-81.5
300 pressed on black with red sunburst color vinyl.
This record has been sold out for the last ten years, but The Cooters held on to a handful of copies, and we are offering them for sale for the first time in ten years! Get ’em while you can! 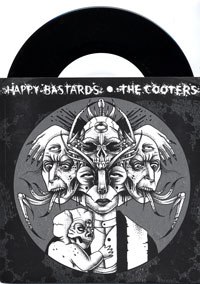 Side One Produced by Happy Bastards
Side Two Produced by Andrew Ratcliffe and The Cooters
Released by Profane Existence, 2008

Two tracks from The Cooters on one side and two tracks from Happy Bastards on the other. All four tracks are not available on any other release. The Cooters side was Produced by Andrew Ratcliffe at Tweed Studios in Oxford, Mississippi and includes the songs “Step Back Jack” and an early demo version of “Take A Stand.” The Happy Bastards side was recorded in Eugene, Oregon and includes the songs “Carried Away” and “What You Get.”

This 7″ vinyl record was released by Profane Existence Records in 2008 for the band’s Fall 2008 West Coast Tour. It has been sold out since then! Get ’em while you can!